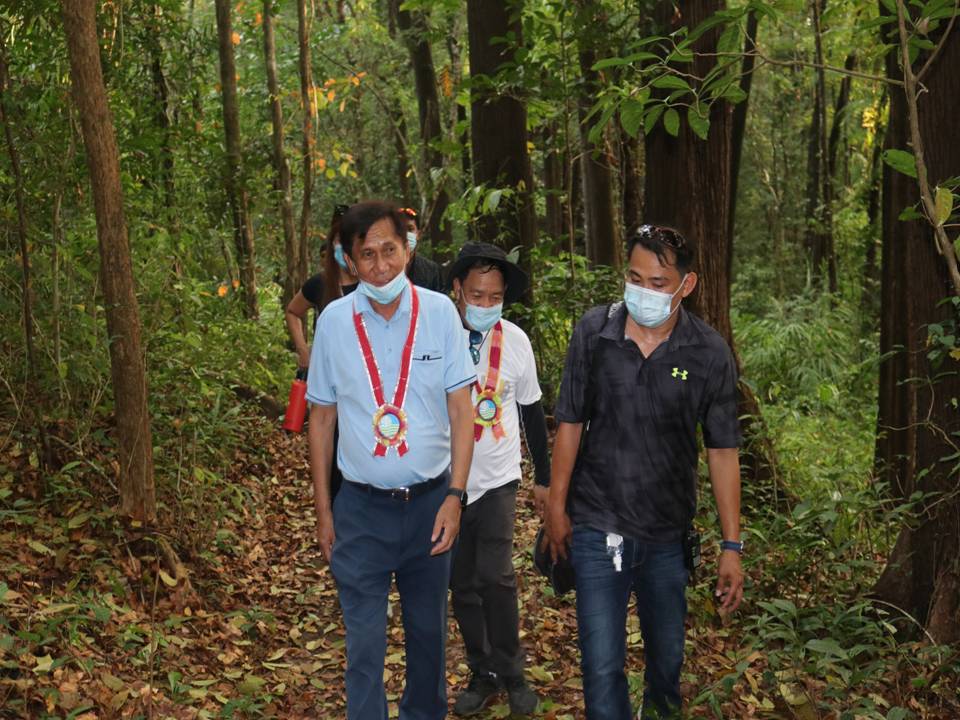 The towering old growth Mahogany trees which were part of the old reforestation project of the government inside Sibalom Natural Park (SNP) has impressed Environment Secretary Roy A. Cimatu during his tour of the area, recently.

Cimatu was the only Secretary of the Department of Environment and Natural Resources (DENR) who visited the SNP and talked to the local people, whom he thanked for helping protect and conserve the natural park. Aside from the Mahogany trees, many native tree species could be found inside the Park.

In a meeting with the regional key officials of DENR Region 6 led by regional executive director Francisco E. Milla, Jr., Cimatu gave the tall order to conduct a deep study on the possibility of adopting the use of fast-growing trees to be planted in National Greening Program (NGP) areas. He also wanted that DENR field offices determine the number of growing/alive trees, and ordered the inventory of trees thriving within the protected area.

The Sibalom Natural Park is one of the last remaining lowland forests in Panay, where the endangered Rafflesia speciosa, was discovered in 2002. The flower has since become a symbol of the SNP. Secretary Cimatu have seen first-hand the natural beauty of SNP and is proud to know that both the DENR and the locals are working towards its preservation. Intensified Forest Protection is one of the top ten priority programs of Secretary Cimatu./DENR 6

DENR 6 mourns the loss of the woman behind Secretary Cimatu 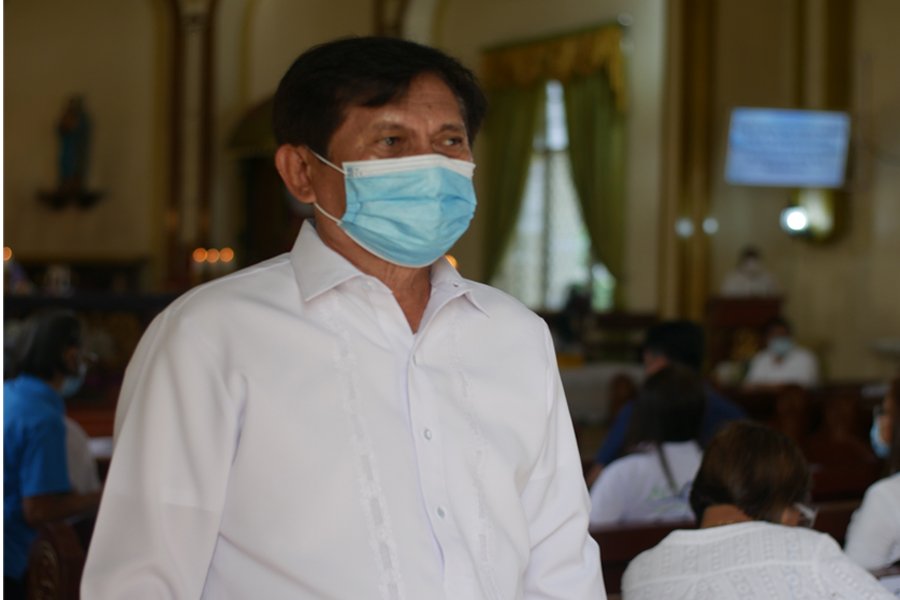 Flowers adorned the entrance way of the Aguillon-Cimatu residence in San Jose, Antique (left), showing how Fe Aguillon Cimatu is loved by so many especially of her own “kasimanwas”. One of the most admired general in the country, now DENR Secretary Roy A. Cimatu (right) looked solemn as he walked inside the San Jose Cathedral./DENR 6

She was the love of his life, his own brave soldier, his loyal companion. Until the day she had to bid him goodbye.

The beautiful and endearing Fe Aguillon Cimatu, wife to former general and today, DENR Secretary Roy A. Cimatu, quietly passed away on February 20, 2021 due to lingering illness.

Ma’am Fe, a native of San Jose, Antique, is Secretary Cimatu’s foremost cheerleader, consultant and critic, all rolled into one. She was the positive influence behind the big accomplishments he achieved while still in the military, as peace envoy and as DENR Secretary.

In his eulogy during the necrological service on February 25, 2021 at the couple’s residence in San Jose, Antique, Regional Executive Director Francisco “Toto” E. Milla, Jr. of the Department of Environment and Natural Resources in Region 6, said: “Behind the success of every man is a woman.” Milla noted how Ma’am Fe had served as the Secretary’s inspiration and the reason behind DENR’s success in environmental governance of the country by “making exemplary, radical changes for sustainable development.”

On a personal note, Milla reminisced the moments when Secretary Cimatu visits Region 6 together with Ma’am Fe, and how she took the initiative to book for their plane tickets, hotel room and fetched by her own family vehicle.

“As a wife of the highest official of DENR, she did not want to abuse her husband’s position by availing of government resources,” Milla said. “Truly, Ma’am Fe is a woman of integrity,” he added.

In his eulogy, Secretary Roy A. Cimatu, recounted his days with Ma’am Fe and how his ever supportive wife sacrificed a lot of things beginning after the wedding. He remembered how while still in honeymoon, he was called back to service. He was then assigned in Marawi, and he took Ma’am Fe with him. From there, they both journeyed in life together. She was always with him, a very supportive, loving companion who provided insights into the many things he planned to do.

As a tribute to her, he shared his lifetime award to Ma’am Fe as part of his eulogy during the necrological service. Cimatu’s lifetime award is a recognition of his 50 years in military service, foreign service and civil service.

The employees and officials of DENR offices nationwide deeply mourn and share the grief of Secretary Cimatu and of the Aguillon family. Nevertheless, Secretary Cimatu is intent on pursuing the many environmental projects he had started, especially in Western Visayas./DENR 6 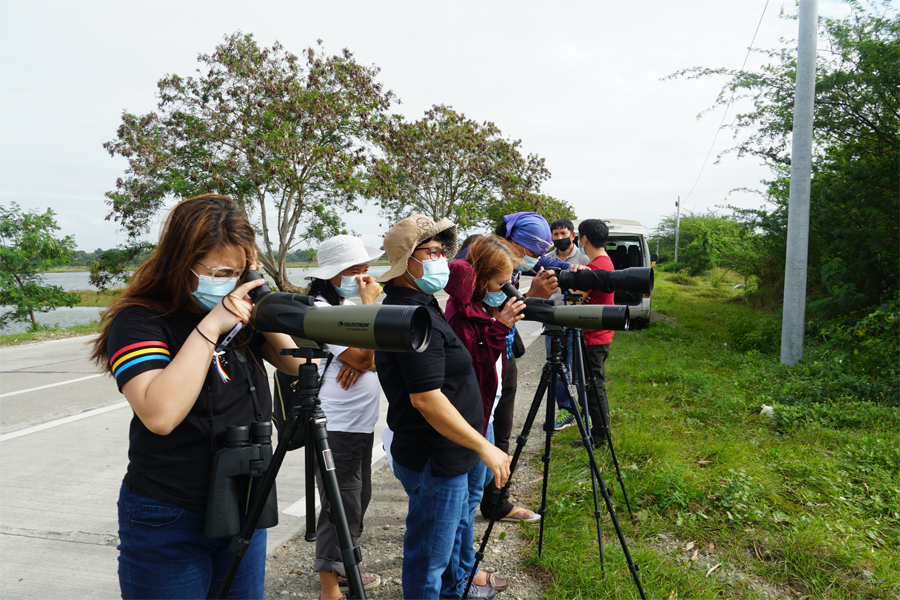 A team from Conservation and Development Division (CDD) of the Department of Environment and Natural Resources (DENR) in Region 6 was fortunate to have spotted the Glossy ibis (Plegadis falcinellus) for the second time during the conduct of the bird watching and bird counting activity at Hinactacan wetlands in La Paz district and in Tubigan, Zarraga, Iloilo province, respectively.

On February 2, the Glossy ibis, a very rarely seen migratory bird in the country was found feeding, wading and flapping its wings in the wetlands of Hinactacan, La Paz district during the bird watching activity in celebration of the World Wetlands Day.

The first sighting of this ibis bird species in Hinactacan, Lapaz was documented last November 29, 2020. That was the first time it was seen in Panay Island.

It is a wading bird with a global range that is mostly widespread of all ibis species but very rarely observed in the Philippines. It is considered as Least Concern (LC) by the International Union for Conservation of Nature’s (IUCN) Red List.

This year’s theme for World Wetlands Day is: “Wetlands and Water” and highlights wetlands as a source of freshwater. In line with this, the DENR in Western Visayas encourages people to take actions to restore and stop wetland loss.

We are now facing a rising freshwater crisis that threatens people, animals including these migratory birds, living organisms and the planet as we use more freshwater than what nature can replenish.

This year’s campaign focuses on the contribution of wetlands to the quantity and quality of freshwater on our planet. Water and wetlands are connected in an inseparable co-existence that is vital to life, well-being and health of the planet.

“This year’s World Wetlands Day is made extra special due to the second recorded stopover of Glossy ibis, a migratory bird that very rarely visits the country. It was found feeding and foraging in one of the wetlands here in Iloilo City. It only shows we have healthy wetlands in the city and we encourage everyone to help preserve theseprecious natural resource,” said regional executive director Francisco E. Milla, Jr.

Clean water and enhanced biodiversity conservation are among the priority programs and projects of theDENR Secretary Roy A. Cimatu./DENR6 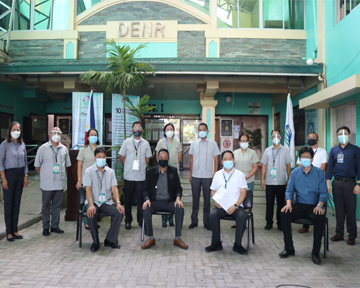 Regional Executive Director Francisco E. Milla, Jr., on behalf of the DENR Region 6, received the congratulatory certificate given by the Civil Service Commission.

The Civil Service Commission is mandated to inspect and audit the personnel actions and programs of the departments and other government offices and to also conduct periodic review of the decisions and actions of offices with delegated authority by the Commission.

With these, the CSC launched the CSC Agency Accreditation Program (CSCAAP) and enhanced through the Personnel Management Assessment and Assistance (PMAAP) which adopted the PRIME-HRM that strategically aligns the government agencies in achieving their goals and excellent performance of human resources management functions, encouraging innovativeness, integrity and productivity in public service.

DENR Region 6 has met the maturity level indicators in all four (4) HRM systems which are; Recruitment, Selection and Placement; Performance Management; Learning and Development; and Rewards and Recognition.

The Department was also granted privileges such as authority to approve appointments subject to post audit and also to maintain the status under Level 2 and continue to improve in its HRM systems for the next higher level. RD Sarmiento said not too many agencies have achieved the Bronze Award for Maturity Level II.

Moreover, the CSC will be having a joint tree planting activity in connection to the Linggo ng Kalikasan for its 120th CSC Anniversary celebration with the tentative date set on September 25, 2020. The CSC plans to limit the participation of its personnel and other participants to observe heath protocols to prevent contracting the coronavirus disease 2019 (COVID-19).

“I would like to proudly congratulate all the DENR Region 6 personnel for possessing exemplary public service that bears the PRIME-HRM Bronze Award Maturity Level 2. We are a step higher to serve the public efficiently as we continue to improve our human resource systems,” said regional executive director Francisco E. Milla, Jr.