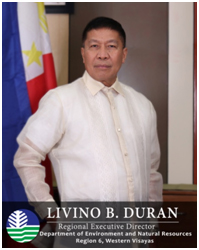 Forester LIVINO B. DURAN become the 19th Regional Executive Director (RED) of the Department of Environment and Natural Resources (DENR) in Western Visayas on June 02, 2021 by virtue of Special Order No. 2021-293 signed  by DENR Secretary Roy A. Cimatu.

A native of Sebaste, Antique, RED Duran is a graduate of Bachelor of Science in Forestry from G. Araneta University Foundation in Manila (now the De La Salle–Araneta University). He started with the then Bureau of Forest Development (BFD) as Forest Technician in 1982. RED Duran is the perfect example of a leader who rose from the ranks and holds the position of PENR Officer from 2002 until 2009 assigned in various provinces in the region and become known for being brave, even facing death threats in the line of duty. He was also designated as OIC-RTD for Forestry; Asst. Regional Director (ARD) for Management Services then ARD for Technical Services; OIC Regional Director of EMB 6; OIC-Regional Director for Negros Island Region, and finally, the new RED of Region 6, Western Visayas. He is a Career Executive Service Eligible (CESE).