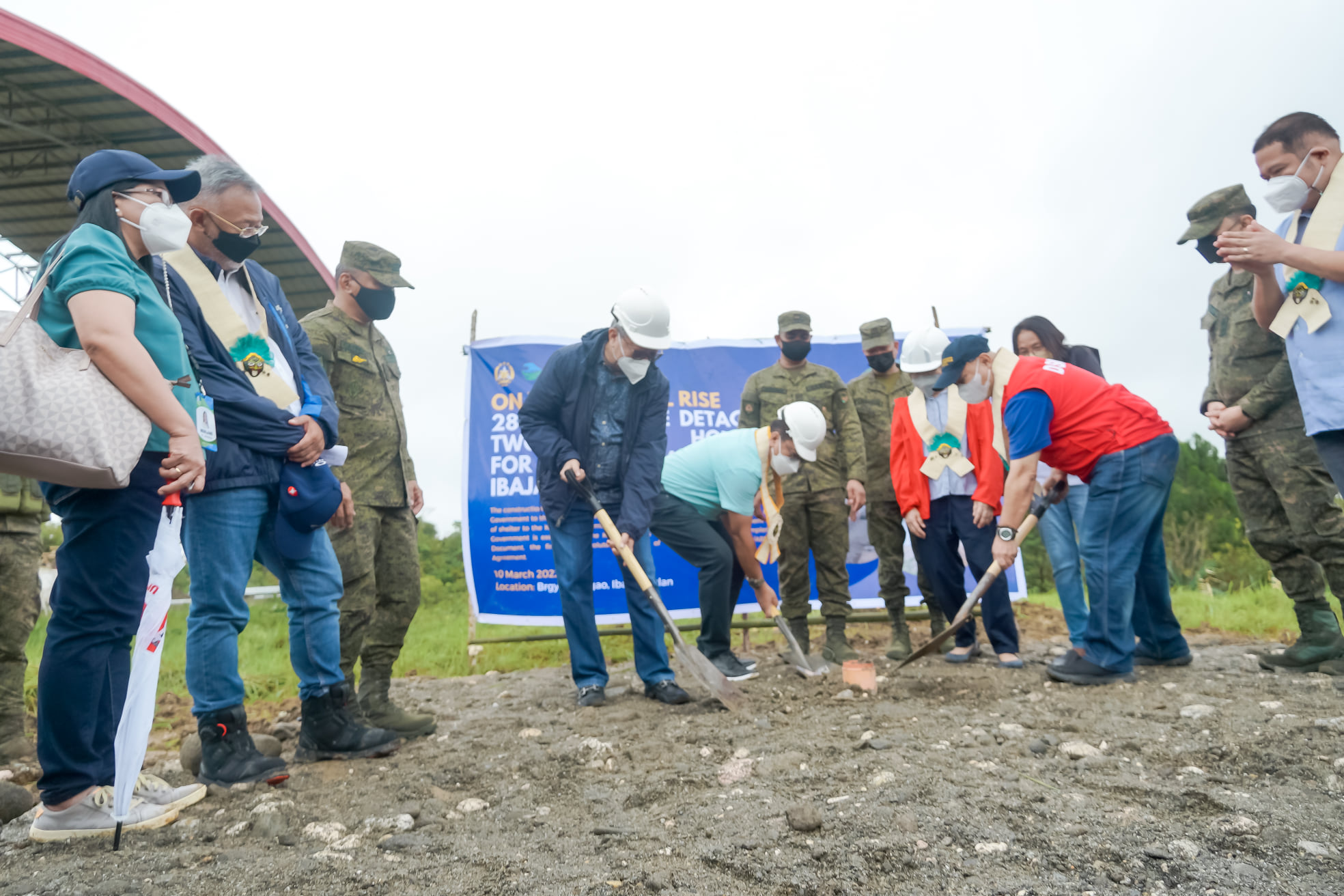 An initial of sixteen housing units out of 44 were also turned-over to Kapatiran members during the event. The housing units were built by the 63rd Engineering Batallion of the Philippine Army.

The 28 two-bedroom housing units, also called “core shelters” shall complete the 44-housing units committed by the government to the Kapatiran members who will resettle in Ibajay PDC site. The core shelter provision forms part of the final step of the 2000 Peace Agreement which the government executed for the Kapatiran, as outlined in the Clarificatory Implementing Document.

Meanwhile, the EFR Production Plant is a partnership among Department of Science and Technology (DOST), Kapatiran and the Office of the Presidential Adviser on Peace, Reconciliation and Unity (OPAPRU), formerly known as Office of the Presidential Adviser on Peace Process (OPAPP). This is to support a long-term livelihood and to provide nutritious and ready-to-eat food that can be used as sustenance in times of calamity and disasters.

The Coco Mill was a contribution to the Kapatiran by the Provincial Government of Aklan which will provide them with livelihood through crude oil (coconut) production to be used as feed ingredient or raw material for cooking oil and pharmaceutical and industrial products.

Kapatiran members are now equipped with the basic necessities with the turn-over of the water distribution system and solar mechanized facility right within the PDC site.

As part of attaining the provisions on peace process, the government led by the OPAPRU and the Department of Environment and Natural Resources (DENR) have guided Kapatiran members since 2014 towards being reintegrated into the mainstream society by providing them first with livelihood.

From 2014-2020, the DENR in Region 6 have provided  the Kapatiran with a total of 401 hectare of project areas enrolled under the National Greening Program (NGP). The Kapatiran was able to raise 398,367 seedlings with total project cost of more than six million pesos.

Their PDC site was established with DENR granting them the tenurial instrument called the Community-Based Forest Management Area (CBFMA) which was awarded to them in April 25, 2018, thereby assisting them in their reintegration to the mainstream society. From there, development projects snowballed and the provisions of other necessities are provided by other national government agencies.

In his message to them, USec Adobo gave another great news to Kapatiran members in Aklan by relaying what Secretary Jim O Sampulna said: “This is really a community but we were talking of some other missing element. Your 57 hectare may not sustain the raw material needed for your oil mill. We will be adding another 100-hectare to your 57 hectare.” Kapatiran members are overjoyed with this pronouncement.

“The process to finally give them everything they needed for their reintegration to the mainstream society may have taken years. But it was all worth it and we believe the Kapatiran appreciates our sincere efforts and that of the other government agencies,” said DENR 6 Regional Executive Director Livino B. Duran. 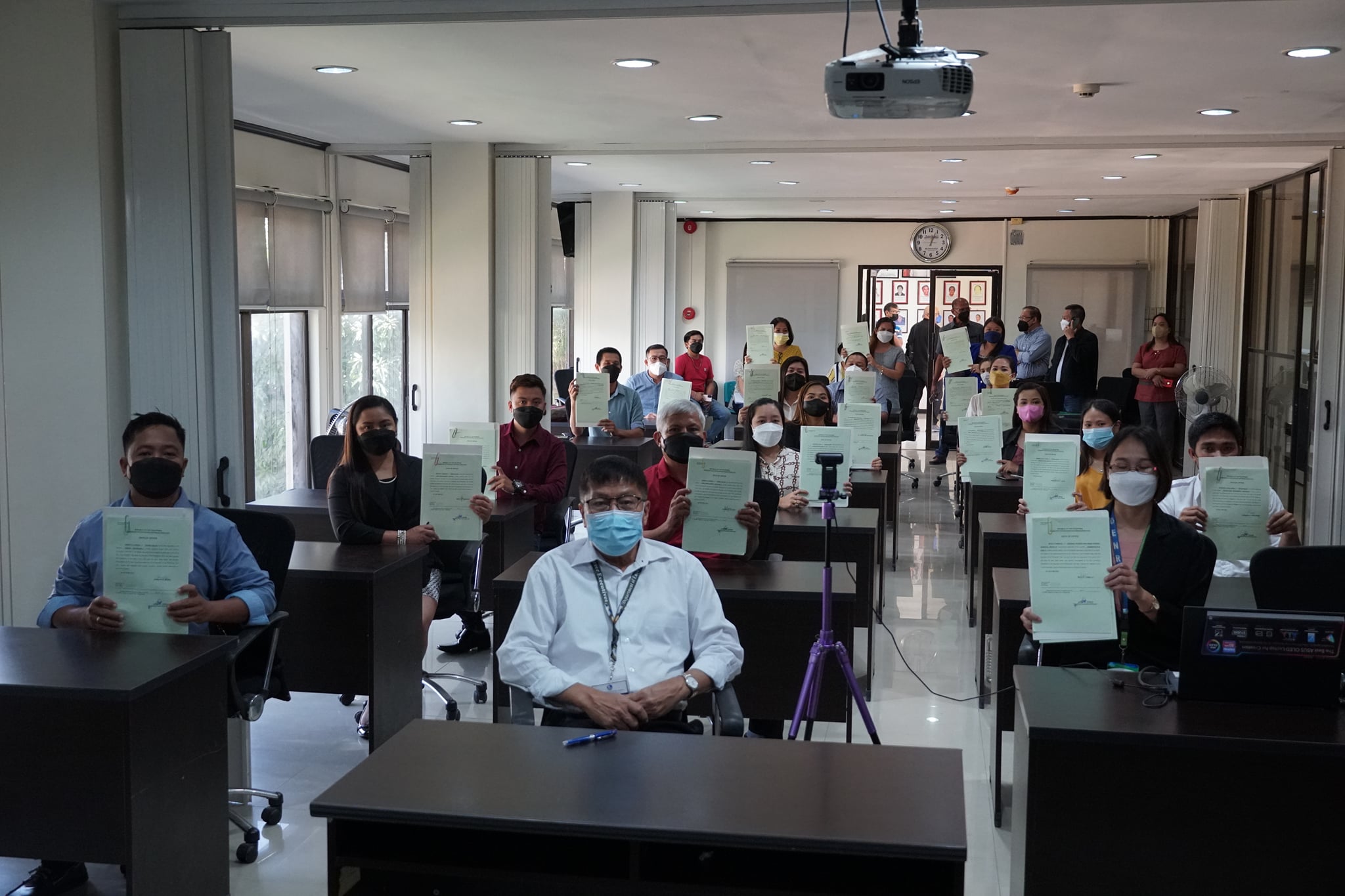 The Department of Environment and Natural Resources (DENR) Region 6 conducted an oath-taking ceremony for the nineteen (19) newly appointed and promoted personnel assigned at the Regional Office, Provincial ENR Office Aklan and PENRO Capiz on March 01, 2022 at the DENR Activity Center.

DENR Regional Executive Director Livino B. Duran had point out his expectation to those personnel with (1) compliance to the office decorum and to instruction, and (2) demand of performance. RED Duran also encourages the future appointee to bring their family members and love ones to the oath-taking activity for he believes that this is the precious gift to their family.

“I want to point this out to our future appointee, to bring your family in witnessing your oath-taking. This is the best gift you could offer to them, to support them,” said Livino B. Duran.

“Your credentials speak for yourself. I want you to take care of your position,” he added. 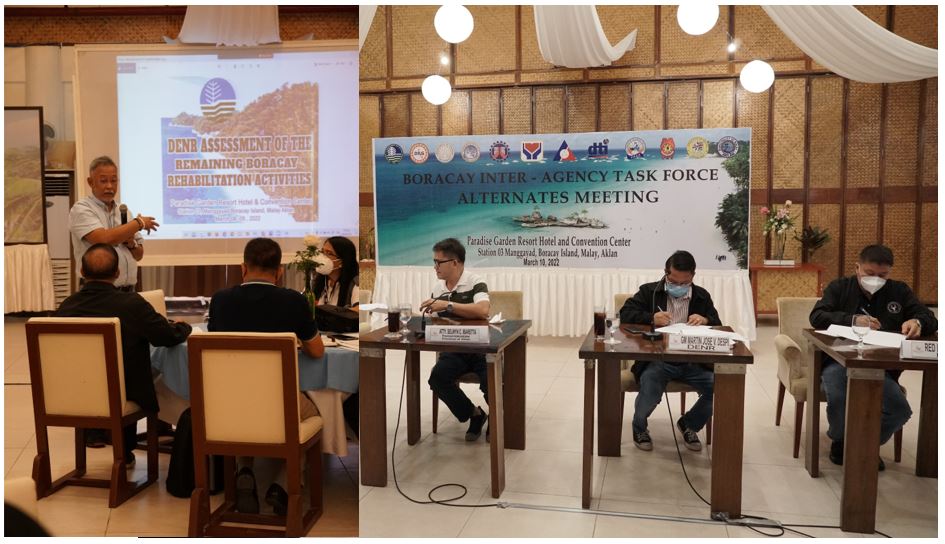 The Boracay Inter-Agency Task Force (BIATF) presented its assessment of the remaining Boracay rehabilitation activities  and subsequently conducted a meeting with the alternate members of the Boracay Inter-agency Task Force last March 08-11, 2022 at Boracay Island, Malay Aklan in order to move forward in pursuing its long-term goal of restoring the natural beauty of the Island and to regain its prestige as a “paradise on earth”.

DENR key officials and the alternate members of the Boracay Inter-agency Task Force cemented their commitment to complete their mandate on the rehabilitation of Boracay until June 30, 2022 pursuant to Executive Order No. 147, s. 2022.

“There is a need for us to firm up DENR’s position in the rehabilitation of Boracay and to commit to it for the succeeding months to come,” said Undersecretary Ernesto D. Adobo Jr., who presided the meeting as Head of BIATF Secretariat.

The four-day activity centers on updates regarding the progress of the rehabilitation of Boracay Island as well as the pressing concerns to be addressed and their corresponding action plans, pursuant to the Boracay Action Plan (BAP).

Before the end of the four day activity a Memorandum of Agreement (MOU) was entered into by the DENR with the Department of Human Settlements and Urban Development (DHSUD), Boracay Inter-Agency Rehabilitation and Management Group (BIARMG), National Housing Authority (NHA), Provincial Government of Aklan, and Municipal Government of Malay in order to provide a  relocation/resettlement site for Boracay workers whose houses were affected by the rehabilitation activities.

The MOU aims to provide a framework of cooperation and partnership among the member-agencies that shall jointly facilitate the establishment of the Boracay Workers Village (BWV).

It can be recalled that pursuant to EO No. 53 s. 2018, the Interagency Task Force formulated the BAP that served as a guide for Boracay Island’s rehabilitation. The BAP highlights four thematic areas namely, Enforcement of Laws and Regulation (Theme 1); Pollution Control and Prevention (Theme 2); Rehabilitation and Recovery of Ecosystems (Theme 3); and Sustainability of Island Activities (Theme 4). The rehabilitation activities focused on these four thematic areas which ultimately aims to ensure the conservation and protection of Boracay Island.

The rehabilitation of Boracay Island is one of the top ten (10) priority programs of the DENR./ DENR 6 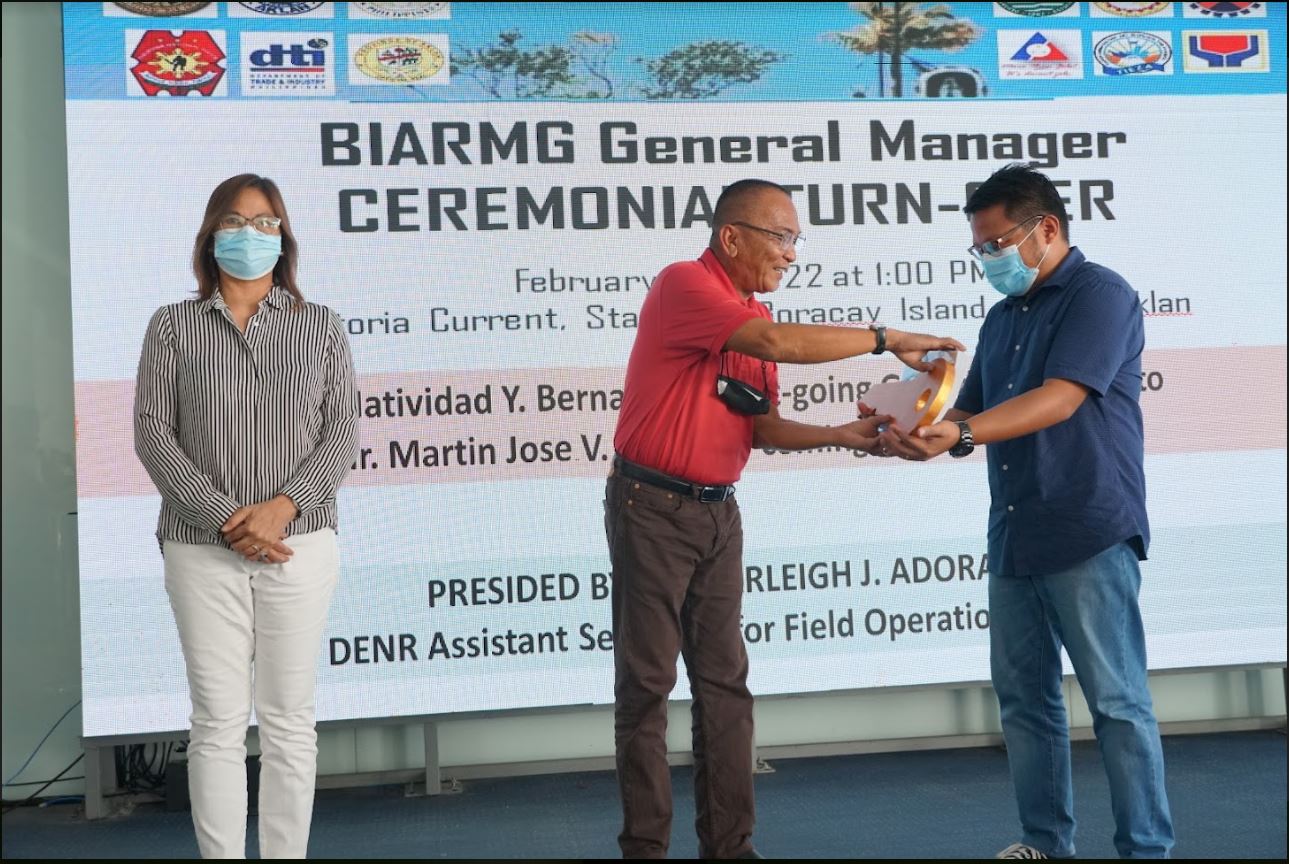 The Boracay Inter-Agency Rehabilitation and Management Group (BIARMG) have a new General Manager in the person of Director II Martin Jose Valentino Despi.

Director Despi is not new to the rehabilitation works implemented by the government in Boracay Island. He was there from the beginning of the rehabilitation as a former Head Coordinator of the Beach Tourism Monitoring Team (BTMT) of the Department of Interior and Local Government (DILG) under the Office of DILG Undersecretary for Operations, Epimaco V. Densing, III.

From DILG Despi transferred to the Department of Environment and Natural Resources (DENR) and was given the Director II appointment at the Environmental Management Bureau (EMB). Prior to his assignment as BIARMG General Manager, he was the Assistant Regional Director (ARD) for Special Concerns at the National Capital Region by virtue of Special Order No. 2021-362 on July 8, 2021.

During the simple turn-over ceremony on February 2, 2022, Despi admitted that he “didn’t even think this would be possible in the future.” He never thought of himself being given the assignment as GM and would again return to the beautiful island of Boracay to continue with the rehabilitation works.

Despi also thanked outgoing GM Natividad Y. Bernardino “for her dedication despite the risks and threats she has gone through just to deliver what the Secretary wanted – to provide a better Boracay not only for Boracaynons but for the entire country.”

“She (referring to outgoing GM) turned over the responsibility to continue the gains we have had and to perform the remaining activities. Mas malaki ang challenge sa ngayon because patapos na tayo and we wanted later on to have this turned-over to various government agencies that will assume specific mandates in Boracay Island. We do hope we could already have the Boracay Island Development Authority (BIDA),” said RED Duran.

Despi is the fifth BIARMG GM. The management started with Engr. Paquito T. Moreno, Jr., now Regional Executive Director (RED) in Region 3. Moreno turned-over the responsibility to RED Francisco E. Milla, Jr. who was assigned as RED for DENR 6 in 2019 and was reassigned in Region 5 in June 2021. Then, RED Milla turned it over to RED Duran, formerly DENR 6’s ARD for Technical Services and now RED of DENR 6, who later turned it over to Natividad Y. Bernardino who is now assigned as the Bureau Director for the Biodiversity Management Bureau (BMB)./DENR 6 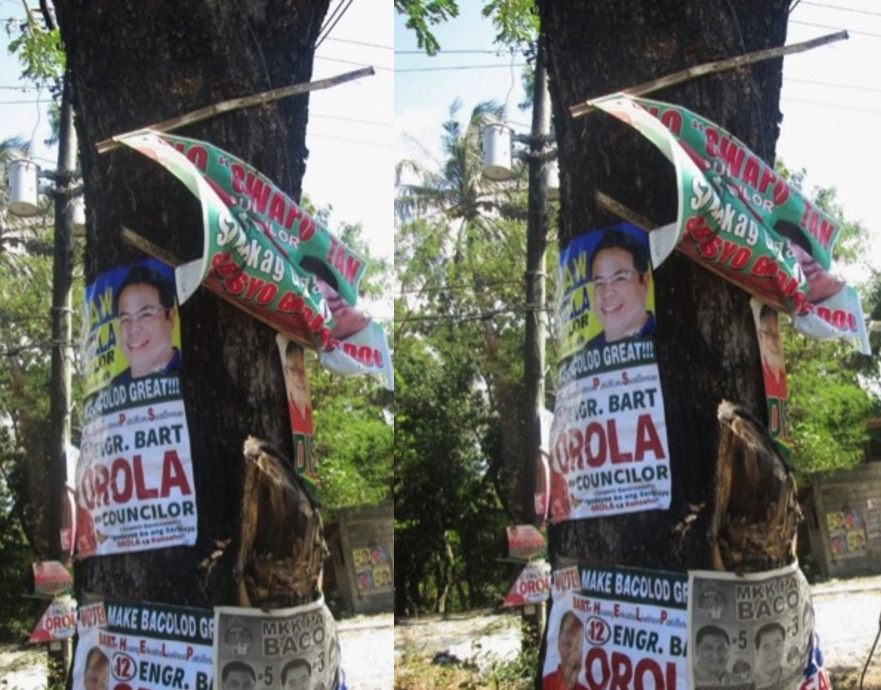 The Department of Environment and Natural Resources (DENR) Region 6 is reminding all candidates in the coming May 2022 elections to be mindful of the environment and spare the trees from their campaign materials and of their other campaign activities.

“The campaign materials should always have their designated posting areas, but not in the trees. The use of iron nails or gun tacker will only injure or damage the health condition of the trees. It would cut through the trees’ protective bark and pierces the inside of a tree, which causes the entry of harmful organisms. Some studies found that it could even cause cancer on trees,” said DENR 6 Regional Executive Director Livino B. Duran.

“We also encourage the candidates to recycle their campaign materials after the election or perhaps, eliminate the use of single-use plastics/wastes by going digital with their campaign,” he added.

Section 3 of Presidential Decree 953 prohibits the cutting, destroying, damaging or injuring of naturally grown and planted trees of any kind unless it is necessary for public safety. The law also prescribe punishment for violators with six months but not more than two years of imprisonment, or with a fine of not less than five hundred pesos but not more than five thousand pesos, or with both such imprisonment than fine at the discretion of the court.

The DENR 6 warned that campaign materials posted on trees will be removed immediately without prior notice and regardless of who the owners are./DENR 6