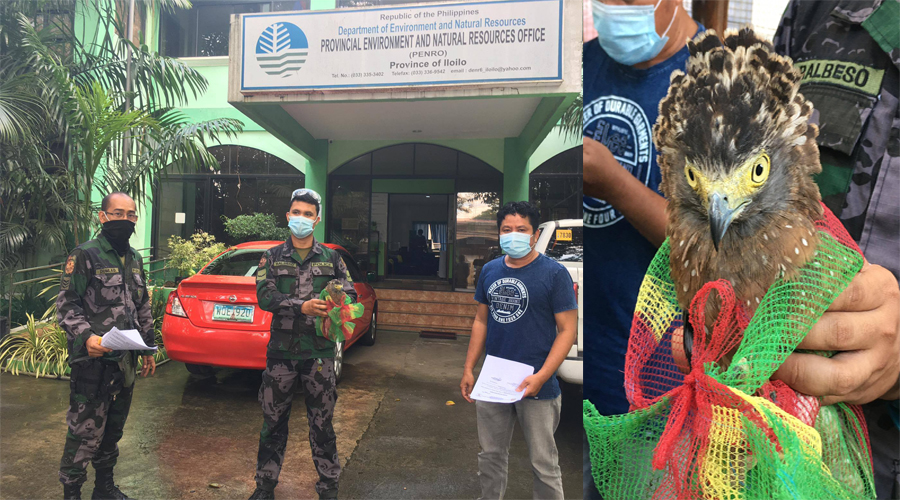 Left: Two policemen from Arevalo Police Station turned-over the eagle to the Provincial Environment and Natural Resources Office (PENRO) Iloilo on January 21, 2021 as represented by Park Maintenance Foreman Rey Lamanero. Right: The Philippine serpent eagle (Spilornis holospilus) will undergo a check up before its release to its natural habitat. (Photo credit: PENRO Iloilo)

ILOILO CITY – A small raptor was found in Arevalo District, this city and was immediately reported to the Regional Strategic Communication and Initiatives Group (RSCIG) of the Department of Environment and Natural Resources (DENR) Region 6 with the help of media partners.

A certain Jza Perocho and her family in Zone 13, Brgy. Calaparan, Arevalo, Iloilo City found a limping juvenile Philippine serpent eagle (Spilornis holospilus) at their backyard. They sought the help of a local media outlet who called up the office of the RSCIG for assistance. On January 21, 2021, police personnel of PNP Arevalo located the Perocho family in Brgy. Calaparan who turned over the serpent-eagle to the Provincial Environment and Natural Resources Office (PENRO) Iloilo in Parola Street.

The Philippine serpent eagle has a trace of wound on its right leg but is well enough for release. From PENRO Iloilo it was transferred to the Community ENR Office in Guiboingan, Miag-ao and was eventually released in Maasin Watershed Forest Reserve on Saturday, January 23, 2021.

An endemic species in the Philippines, the Philippine serpent eagle is mostly found on major islands in the country except Palawan. It is considered as least concern (LC) by the International Union for Conservation of Nature’s Red List of Threatened Species (IUCN Red List) and BirdLife International.

These snake and lizard-eating eagles are capable of adapting to changing environments compared to some eagle species. Juveniles are brown from above with rufous to buff edges and they have a white crown. The mantle is streaked and spotted with brown and there are two dark patches behind the eyes. The feathers along the wing-coverts are white at the base and the tail is dark brown with a light-colored tip and three brown bands. The undertail is gray-white. Underparts are cream to white with heavy rufous markings along the breast and paler rufous streaking along the belly and thighs. Eyes are gray.

The Philippine serpent eagle’s call is a sharp rising and falling whistle. Although they are common within their range, their existence is threatened by habitat loss.

“I am grateful for the environmentally responsible citizens for their continuous support in the protection and conservation of our species and the environment here in Western Visayas. These efforts are precious as it allows us to see eagles and other birds fly and soar high in the sky,” said Francisco E. Milla, Jr. DENR 6 regional executive director.

Enhanced Biodiversity Conservation is among the ten priority programs of Environment Secretary Roy A. Cimatu./DENR 6