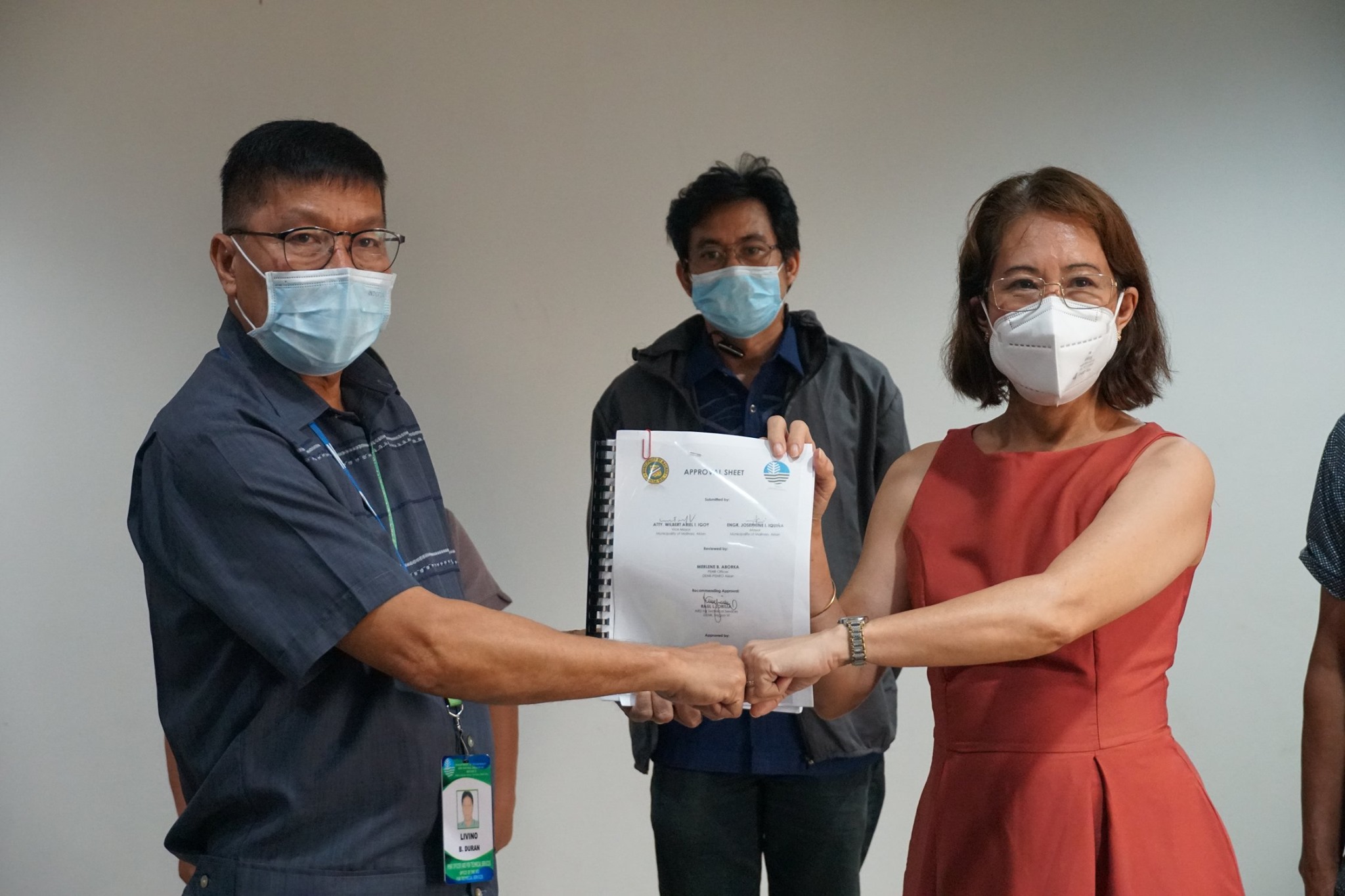 The Department of Environment and Natural Resources (DENR) has sealed its approval of the Forest Land Use Plans (FLUPs) of seven municipalities in Western Visayas. It has recently facilitated the activity dubbed as FLUP Review and Approval and Signing of the Implementation Memorandum of Agreement (MOA).

Although it was a face-to-face activity, it strictly limited the participants coming from the seven different municipalities in order to observe social distancing. It was a 3-day event and participants come by batches for their scheduled FLUP review and approval and signing of their Implementation MOA.

The first day of the event was attended by the delegation coming from Antique and Capiz. Present were municipal mayors, namely: Hon. Margarito C. Mission, Jr. of San Remigio and Hon. John Lloyd M. Pacete of Bugasong, both in the province of Antique; and Hon. Roberto O. Palomar of Tapaz, Capiz.

On the last day of the activity, Aklan province representatives from the municipality of Madalag presented their FLUP. The team was led by Mayor Alfonso A. Gubatina with Eudes R. Torres, SB for Environment, Engr. Hannibal Cometa, SB Secretary, MENRO Adonis Nazareta, PDA Eric Nacor and MPDC Staff Bryle Martinez. For the municipality of Malinao, it was led by Mayor Josephine Equiña together with SB Member Gregorio Imperial, Jr., MDRRMO Niño Carmelo Carmen and MENRO Angelyn Ingeniero.

FLUP is a planning tool that equips LGUs, DENR and other stakeholders to comprehensively map out future economic progress of an area in the context of sustainable forest management, biodiversity management, climate change adaptation, disaster risk reduction and management and forest degradation.

The Implementation MOA is the final document to complete the process of FLUP preparation prior to its implementation. It also serves as a symbol of partnership between the DENR and the local government units to co-manage the forest and forestland resources of the town to ensure sustainable development for the benefit of the people.

The seven municipalities’ local chief executives and representatives expressed their heartfelt gratitude to DENR 6 for providing them with technical support that enabled them to craft their respective FLUPs. At the same time, it is an assurance of the good partnership between the Department and their respective municipalities in terms of environmental protection and conservation./DENR 6

The Presidential Communications Operations Office (PCOO), in partnership with the Department of Interior and Local Government (DILG) and the Philippine National Police (PNP) led the launching a caravan aimed to promote the Duterte’s administration accomplishments for all seventeen (17) regions nationwide.

With the theme: Barangayanihan Caravan Towards National Recovery, the regional launching was done at Brgy. X-Estado, Victorias City, Negros Occidental on September 30, 2021.

The Department of Environment Natural Resources (DENR)in Region 6 supports the campaign and was attended by DENR 6 Regional Executive Director Livino B. Duran and delivered a message in behalf of DENR Secretary Roy A. Cimatu as the Cabinet Officer for Regional Development and Security (CORDS). With him are Assistant Regional Director for Special Concerns Ivene Reyes and Provincial ENR Officer Egdardo M. Rostata.

In his message RED Duran emphasized the very essence of this activity and that is to highlight the success of the government in bringing real change to the lives of the Filipino people in terms of poverty reduction, infrastructures, and peace and order. Ending Local Communist Armed Conflict is considered as one of the major thrusts of this government, thus, Executive Order (EO) 70 was issued pushing for a whole of nation approach with all line agencies and mechanisms of the government to work and act as one.

As of 2019 data of National Task Force-End Local Communists Armed Conflict (NTF-ELCAC), seventy-four (74) barangayas in the region were identified as cleared and considered as Retooled Community Support Program (RCSP) barangays that qualified and availed of the Local Government Support Fund – Support to Barangay Development Program (LGSF-SBDP) intended for the realization of the conflict-free barangays’ plans and programs amounting to 20-M pesos each or a total of Php 1.48-Billion worth of programs and projects.

RED Duran likewise underscored the “big tickets” the government are providing and sustaining to uplift the lives of the people of Western Visayas.

He made mention of the following projects at the local level: solar energy in Cadiz City, Negros Occidental, considered as the biggest in the whole of SE Asia; wind energy in the provinces of Guimaras and Aklan and the hydropower project in Antique, Iloilo and Aklan. These are also considered as sources of renewable energy.

He also highlighted the Jalaur River Irrigation Project in Calinog, Iloilo and the proposed Panay River Irrigation Project in Capiz. The bridge soon the link the island of Panay to Guimaras and Negros Island hopefully will follow. This will shorten the travel time from Iloilo to Negros Island passing thru Guimaras. The clean-up and rehabilitation of Boracay Island after it was tagged as “cesspool” by no less than the President Rodrigo Roa Duterte, DENR Secretary Roy A. Cimatu as CORDS was tapped to lead the challenge of bringing back the lost glory of the island and he did it exemplarily. Boracay Island is earning billions of pesos in revenues just like what the whole province of Aklan is earning for the same period.

On National Greening Program (NGP), a total of 3,467 hectares of bamboo plantations were established benefiting hundreds of members of PO families.

Distribution of food packs, conduct of medical mission and different serbisyo caravan of National Government Agencies, which benefited about 200 residents of the said barangay highlighted the activity. 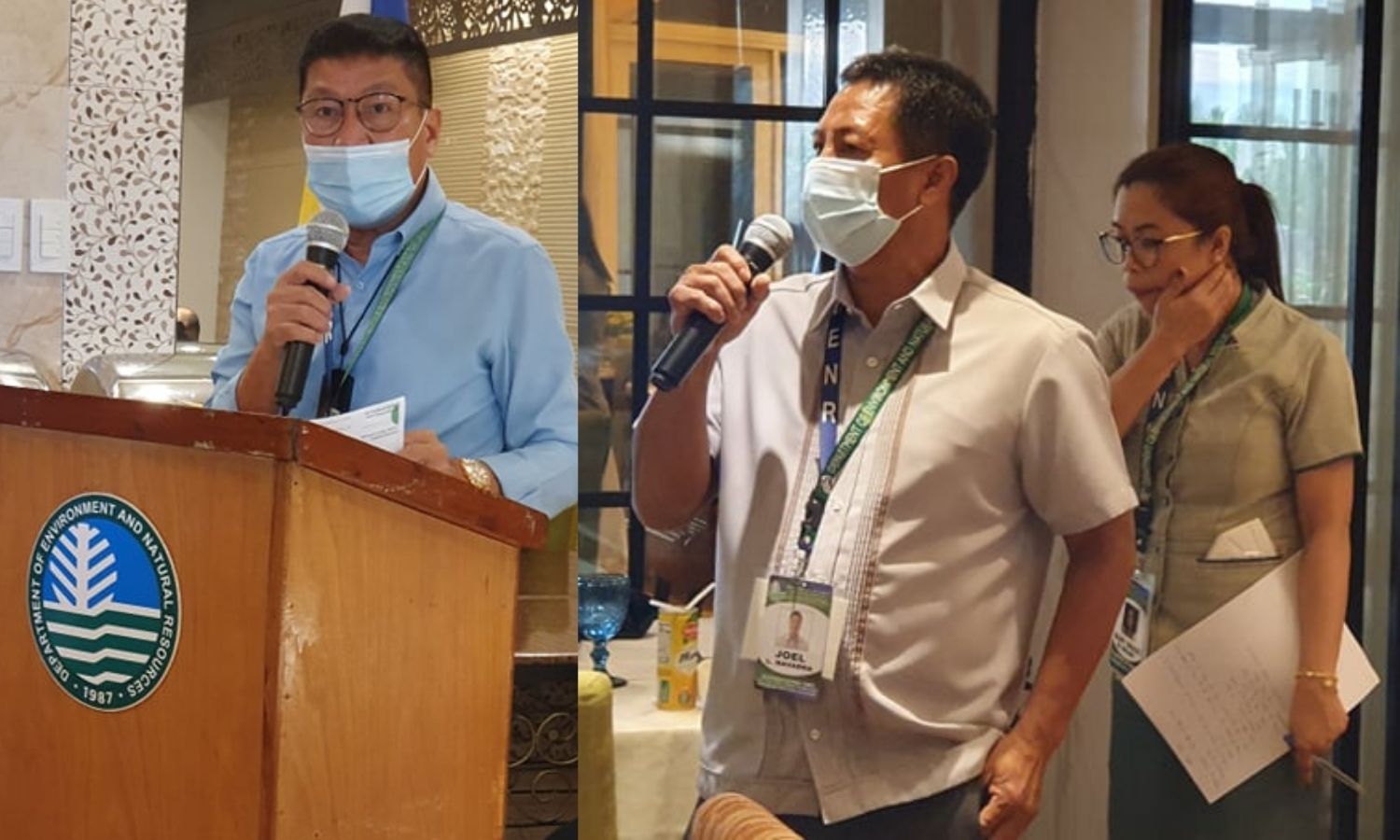 Regional Executive Director, Livino B. Duran attended the Consultative Conference of PENRO Capiz, on August 23-24, 2021 for his second leg of field visit to PENROs. He laid down the Departments' goals and targets that need to be accomplished before the year ends.

“The remaining months before Christmas should be the best time for us to meet and accomplish all the necessary performance compliance. We have to focus on our goals so we can end the year right.”  RED Duran emphasized in his message.

RED addressed and reiterated the updates on the targets; implementation and accomplishments each PENRO and CENRO still need to accomplish, the implementation of the 10 priority programs of the department, the importance of sustaining a good partnership and collaboration with local government units, and lastly to discuss the operational related concerns of DENR Region 6.

Further actions and plans were also discussed to improve survival rate of planted seedlings and trees for NGP. The conference was also designed to focus on accomplishments under the National Greening Program (NGP) which is Secretary Cimatu’s main priority to improve the quality of our environment, particularly our air, water and address solid waste problems.

Other topics and concerns regarding the physical and financial standing of PENRO Capiz and CENRO Mambusao were also discussed.

Amidst the pandemic, DENR 6 prioritizes the welfare of the environment’s stability and growth. There will never be a hindrance when it comes to environment service. 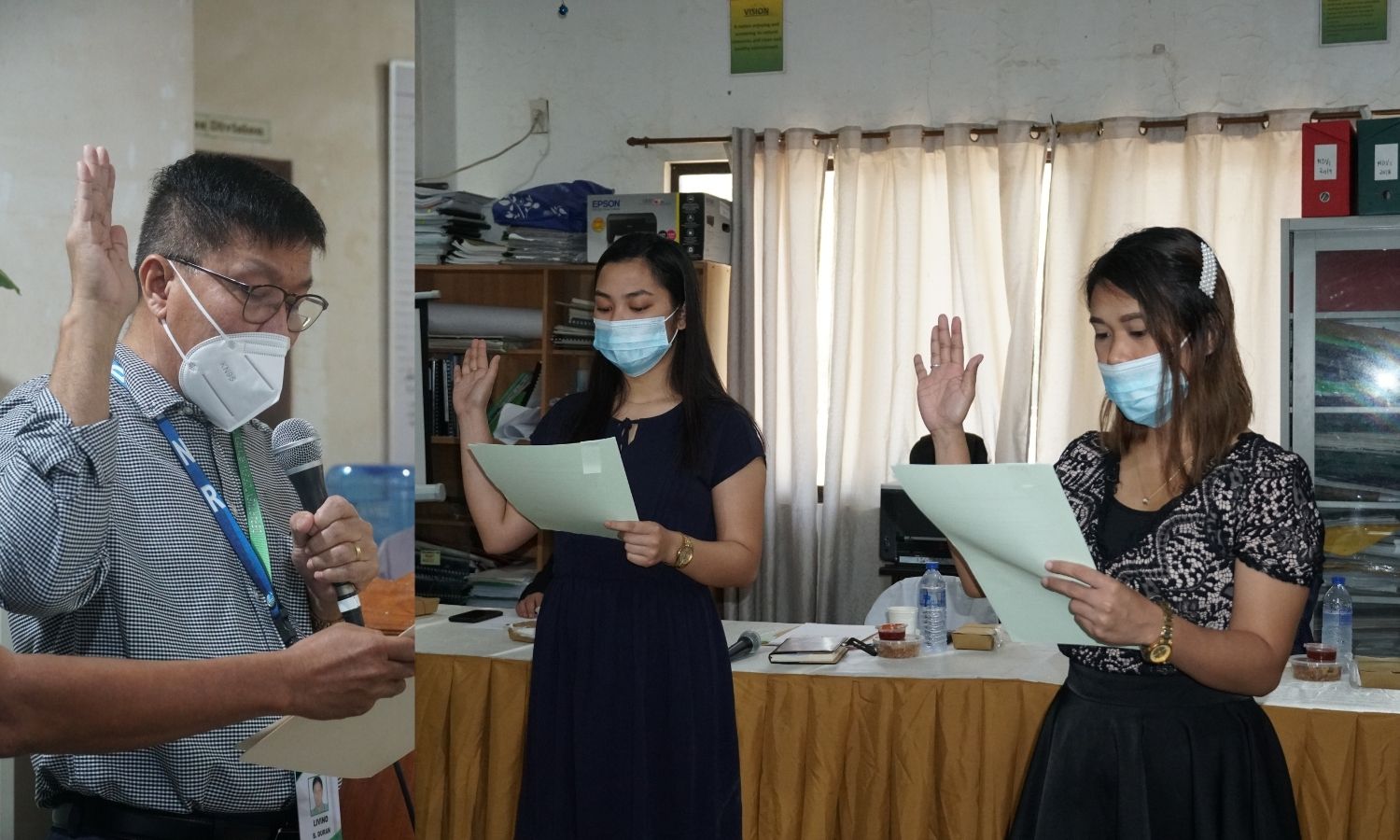 RED Duran emphasized in his welcome speech that they have to step up their work and the quality of service they provide to the public and support their CENROs accordingly.

The said oathtaking was officiated by RED Duran himself and was witnessed by Atty. Noel C. Empleo, ARD for Management Services and Forester Raul L. Lorilla, ARD for Technical Services who sit as Chair and vice Chair, respectively of the Regional Resource Merit, Promotion and Selection Board (RHRMPSB). 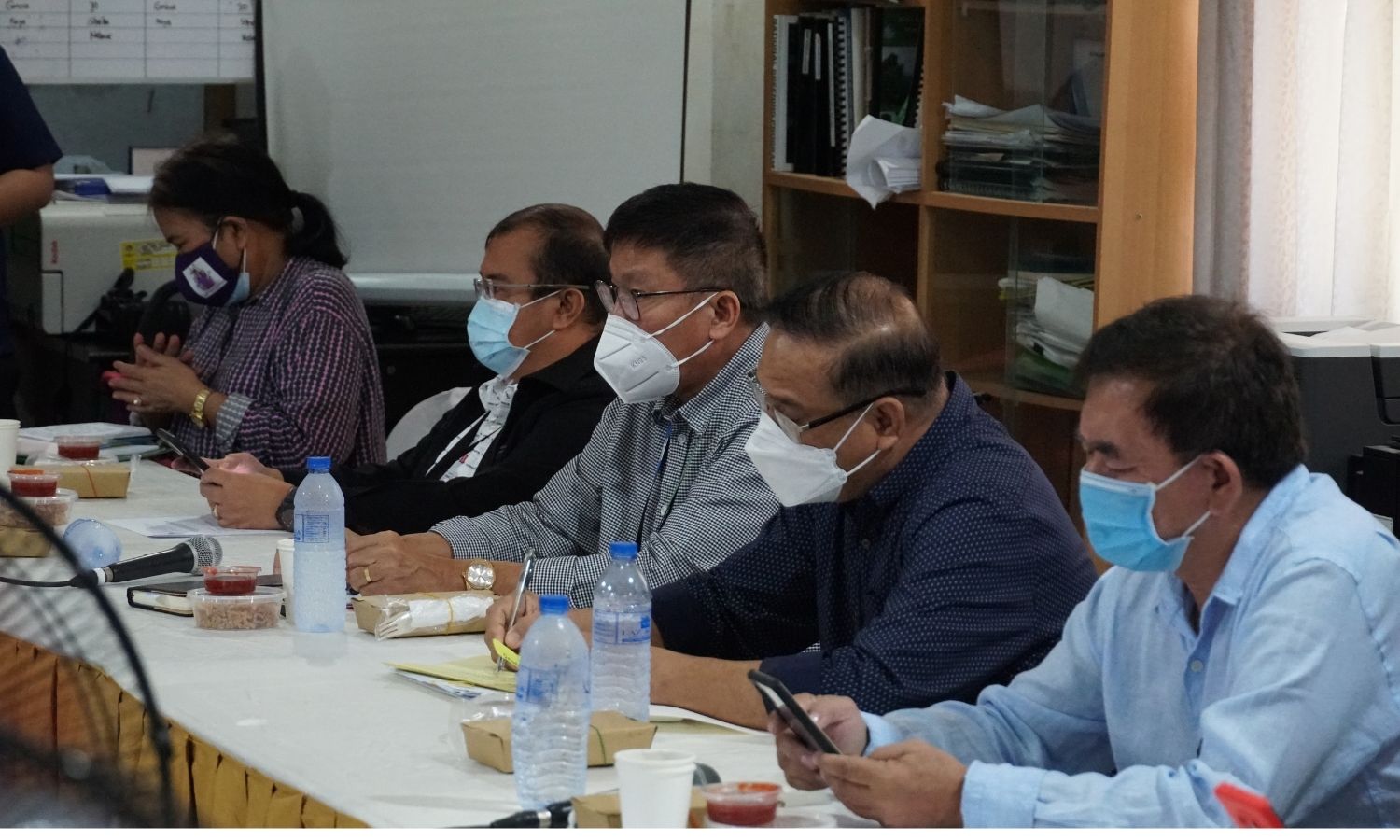 “We still have four months before Christmas to look into our performance compliance, and we need to do our very best to accomplish that during the remaining time that we have,” RED Duran emphasized in his message.

RED also addressed the participants on the updates of their implementation and accomplishments each CENRO and PENRO still need to accomplish some targets under the ten priority programs and lastly to discuss the operational related concerns of DENR Region 6.

The conference was also designed to focus on accomplishments under the National Greening Program (NGP) which is Secretary Cimatu’s main priority to improve the quality of our environment, particularly our air, water and address solid waste problems. Further actions and plans were also discussed to improve survival rate of planted seedlings and trees for NGP.

Other topics and concerns regarding the physical and financial standing of PENRO Iloilo and its three CENR Offices, namely: Barotac Nuevo, Guimbal and Sara were discussed.

Amidst the pandemic, DENR 6 prioritizes the welfare of the environment’s stability and growth. There will never be a hindrance when it comes to environment service.